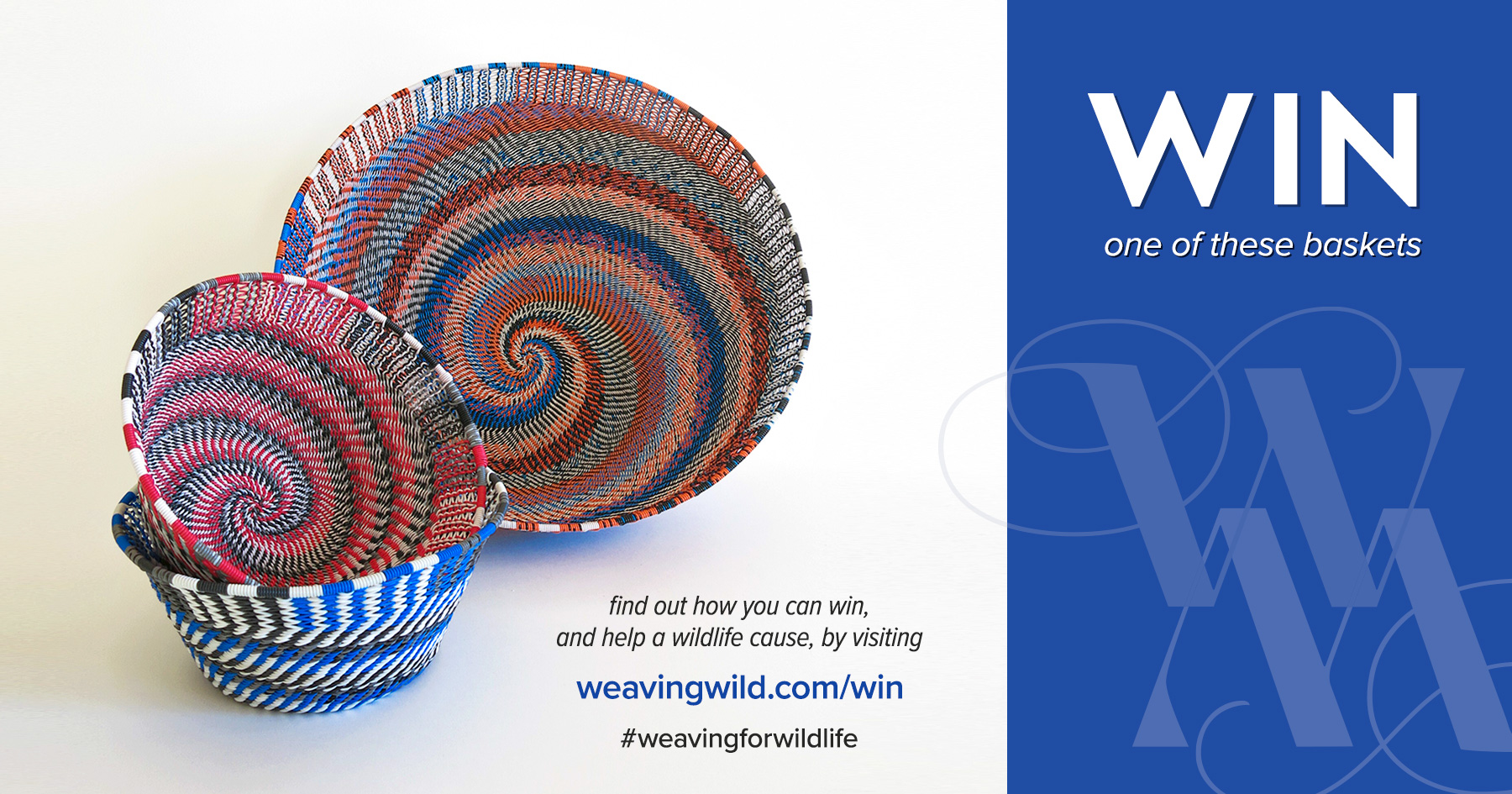 Get your wallets and purses out, folks, I’m Weaving for Wildlife again! We’ve got four lions who need our help to get relocated from Ukraine to a sanctuary in South Africa before the northern winter sets in.

Yes, I did say Ukraine.

3 lionesses (Luca, Charlie and Kai) and one rapidly growing cub (Nathan) have been rescued from abysmal conditions in captivity by the Ukraine chapter of The Lawrence Anthony Earth Organization (LAEOU). There are no sanctuaries for lions in Ukraine so, after much deliberation, LAEOU made the necessary but expensive decision to relocate them to South Africa. A new home has been secured for all four lions at the Kragga Kamma Game Park in South Africa but transporting them across the world is an extremely costly exercise.

The Director of LAEOU, Lionel de Lange, is a South African living in Ukraine, where he works incredibly hard to rescue abused and neglected wildlife held captive in appalling conditions. Some of you may remember Lionel from my Baskets for Bears competition a few years ago. I first “met” Lionel when I came across his Indiegogo fundraiser to build better living conditions for the bears and wolves at Kherson. Their plight moved me so much that I wanted to help raise funds and spread awareness for his campaign, so I offered two of my baskets in a raffle. That campaign met its target, so let’s help Lionel do the same with this one.

I can’t weave fast enough to help fundraise for all of the animals Lionel has since rescued and/or relocated, but I am very pleased to be able to offer him four baskets (three small and one large) to help raise much-needed funding for this logistically complex undertaking.

You can learn more about the lions’ stories on the Lions to SA page of the LAEOU website, but here is their story a nutshell.

Nathan the cub was rescued from an animal trader/circus trainer. He and his sister were taken at two months old to be sold to a circus or private zoo. Sadly, it seems Nathan’s sister has already disappeared into that hellish life. At the time he was found, Nathan was living in a concrete and steel cage with no access to an outside area. There’s a lovely video of Nathan in his temporary enclosure below. He’s getting big!

Luca, Charlie and Kai – the lionesses

Luca, Charlie and Kai were found in the course of rescuing three brown bears from a private zoo. They too were in a concrete and steel cage, one that was filthy and with no direct sunlight or fresh air. Lionel managed to negotiate their release into his care and build them a temporary enclosure while seeking out a permanent sanctuary for them. As Lionel says on the LAEO website:

They are loving their temporary enclosure, spend lots of time playing with the enrichment, stalking each other and lazing in the sun. It’s their first chance in life to be lions and it was amazing to see the change in them from being caged to having the run of a 280m² enclosure.

Whilst the lions are enjoying their much improved, temporary accommodation, it’s not suitable for the impending Ukraine winter. Lionel and his team urgently need to raise enough funds to fly the lions out to South Africa by the end of October at the latest.

To make this happen, they need to raise over USD $35,000. Lionel has provided the following breakdown of costs. Note that the flights for the lions alone (without accompanying vets and support staff) amount to USD $35,100!

So, how can you help these lions AND WIN one of my baskets?

I’m holding raffles for all four baskets. The small ones each take about 27 hours to make, while the large one involves around 50 hours of weaving. In order to be entered into the draw to win one of these special baskets, send me proof of your donation and I’ll enter you in the draw.

Please note: I had initially set the minimum at $15, but after some feedback I’ve reduced it to $5 to enable as many people as possible to enter.

You can make your donation directly to the Lawrence Anthony Earth Organisation Ukraine Chapter via the PayPal Donate buttons on the How to Help page of the LAEOU website.

Once you’ve donated, email your funder name, donation amount and which basket you’d like to win (red/Luca, blue/Kai or green/Charlie) to
brigitte@weavingwild.com with the subject line “Baskets for Lions”.

I was originally directing people to donate via Lionel’s campaign page on the Indiegogo crowdfunding platform. However, that campaign expired at the end of October. While it fell very short of its target, Lionel was able to obtain external sponsorship but he still needs to raise nearly USD $7,000.

This means that I’d like to extend the raffle for a little longer to raise a bit more for the lions. I know it’s an ambitious target, but let’s see what basket power combined with the miracle of crowdfunding can achieve! I apologise for any confusion that the change of donation method may have caused, especially if you’ve landed here via a social media link that referenced the Indiegogo campaign.

Please don’t forget to email me once you’ve made your donation or I won’t know about it and won’t be able to enter you!

made via the PayPal donate buttons on the LAEOU website

The address for entries is brigitte@weavingwild.com.

Two of the small baskets are pictured below and I’m weaving like the wind to finish the third! These baskets are 14cm across at their widest point and 6.5cm tall. Since they’re part of a special series for this fundraiser, they’re all in the same pattern, but the colours are different. If you have a preference for a specific colour (red/Luca, blue/Kai or green/Charlie) please state that when you email me proof of your donation.

The closing date for entries is yet to be confirmed but I suggest you get your entry in quickly as there is an urgent need to get the lions out to South Africa before the Ukraine winter sets in. I’ll announce the winners on this page and on my Weaving for Wildlife and Weaving Wild Facebook pages.

How to enter my Baskets for Lions raffle

The only proviso is that I get at least 10 participants, otherwise it really isn’t viable for me to give the baskets away. So, that’s another incentive for you to share this page with your friends!

Pictured below are two of the three small baskets you could win for a minimum donation of USD $5. The third, green “Charlie” basket is still in progress.

About the large “Nathan” basket

The large basket (Nathan), which took me over 50 hours to weave, is by far my favourite basket to date. For a minimum donation of USD $15, one lucky donor will win this basket.

The “Nathan” basket is woven with blue, orange, black and white wires, some of which are two-tone, imparting a soft, speckled effect. There’s an interesting phenomenon of simultaneous contrast that creates an illusion of pink where the blue and orange wires sit next to each other. It is 26cm across at its widest point and 12cm tall.

Below are some images of the Nathan basket in progress. You can see more on this basket’s Biography page. In the next few days, I’ll be creating biography pages for the other baskets, so that you can trace their evolution.

What makes these baskets special?

Thank you for helping these lions to roam in peace under African skies! I’m looking forward to seeing your name in the draw 🙂

2 comments on “Win a basket and help four lions” 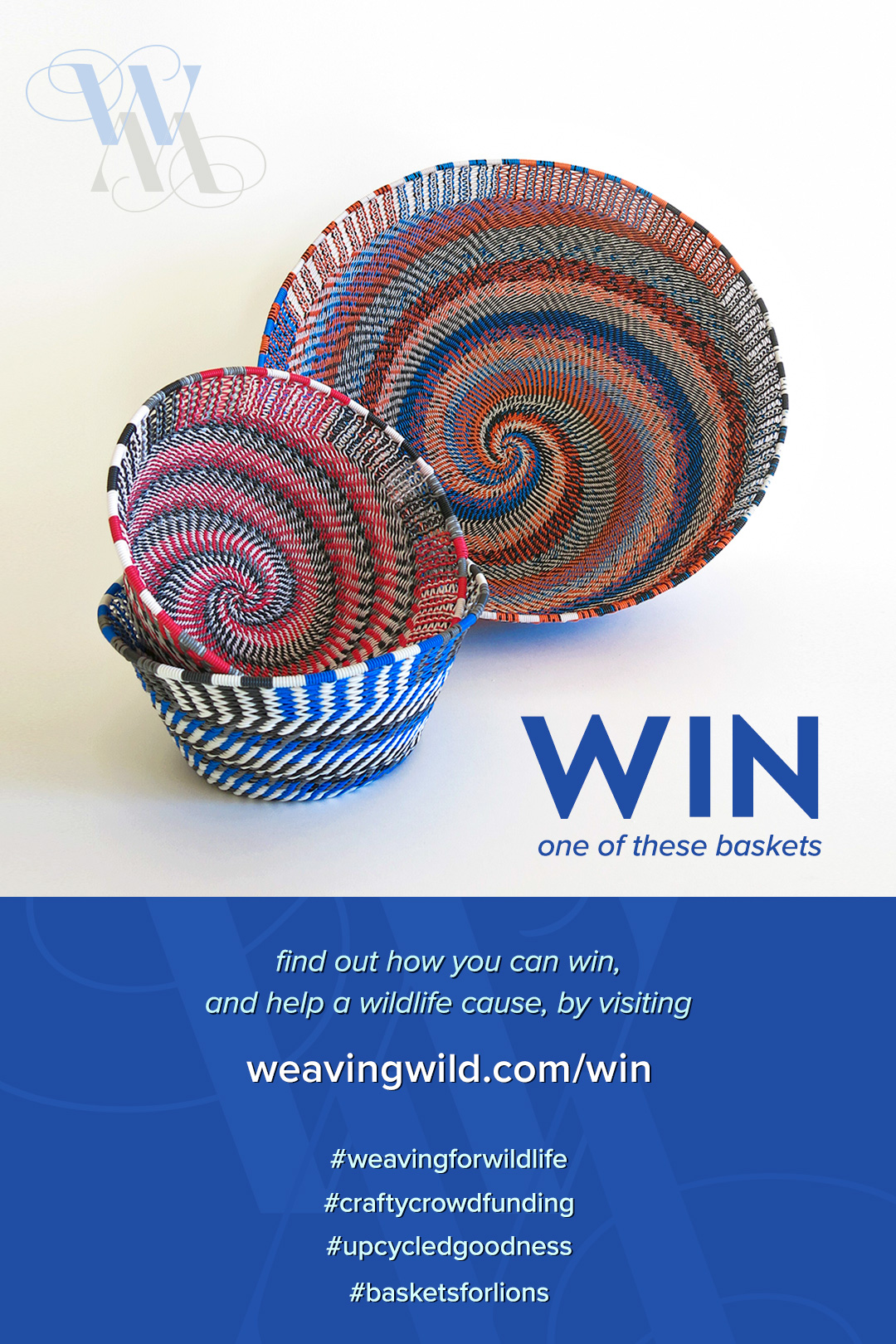